With Wednesday’s rally, all three major averages moved out of correction territory, meaning they are now less than 10% down from their 52-week highs. The tech-heavy Nasdaq also turned positive on the year, up 0.5% in 2020. 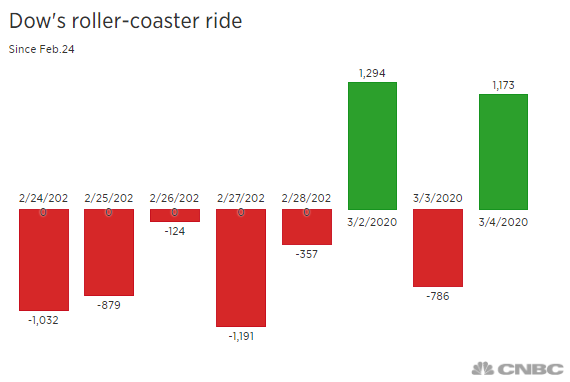 Biden scored key primary victories in states including North Carolina, Texas and Arkansas, giving his campaign momentum and increasing his odds of being the Democratic Party’s presidential nominee. Many investors applaud Biden for his middle-of-the-road tack in contrast to the more progressive policies of Sanders, I-Vt., and Sen. Elizabeth Warren, D-Mass.

The major averages also got a boost from strong economic data. The U.S. services sector expanded at a faster-than-expected pace in February, data from the Institute for Supply Management showed. ADP and Moody’s Analytics said private payrolls jumped by 183,000 last month, topping expectations. Lawmakers also struck a deal on more than $8 billion in emergency coronavirus funding. 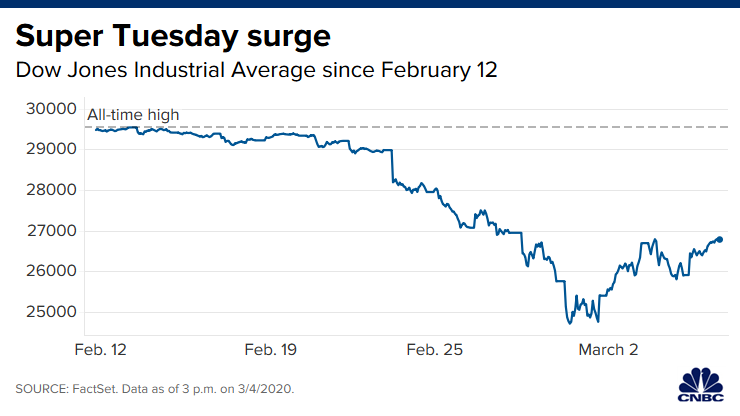 “Investors fear Bernie because he wants to cut off the head of capitalism by raising taxes significantly on the rich and using the funds to provide free everything to everybody else,” said Ed Yardeni, president and chief investment strategist at Yardeni Research, in a note. “Getting everything for free trumps freedom, according to Bernie. No wonder investors are reacting to him as though he is going to infect us all with the virus of socialism.”

Warren, a former law school professor who specialized in bankruptcy law, is not a favorite on Wall Street as she proposes detailed plans to break up big banks and technology companies and raise taxes.

“Stocks will be even more relieved at Warren’s coming concession as they are at Biden’s big showing,” Ritholtz Wealth Management CEO Josh Brown tweeted. “Wall Streeters have always secretly been more afraid of her than anyone else given her domain expertise.”

Wednesday’s moves come after yet another volatile session for U.S. investors as the Federal Reserve announced Tuesday an emergency interest rate cut in an effort to help pacify investors worried about the economic consequences of the coronavirus.

The decision to cut rates by half a percentage point came two weeks before the Fed’s next scheduled meeting and reflected the central bank’s belief that quick action would be most effective to combat the dampening impact of the virus.

Though stocks initially traded higher, the Dow, S&P 500 and Nasdaq Composite all reversed course to end Tuesday’s session markedly lower. The Dow fell more than 780 points, or 2.9%, and the S&P 500 dropped 2.8% with both indexes back in correction.

The Fed’s “Beige Book” report on Wednesday showed the U.S. economic activity expanded at a “modest to moderate” rate over the past week, citing coronavirus as a risk to the outlook.

“We’re trying to reprice the entire stock market based on an unknown, the coronavirus,” said JJ Kinahan, chief market strategist at TD Ameritrade. “When we have such a large unknown, it’s going to affect people in different ways.”