Stocks closed higher Thursday, erasing steep losses from earlier in the day as strong gains in big-tech shares led to a sharp turnaround. 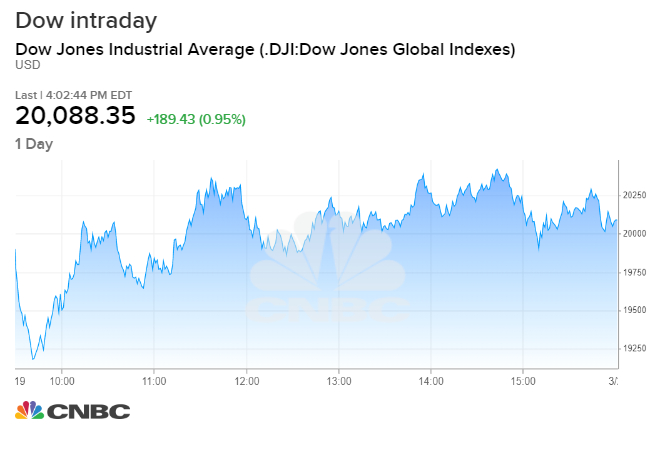 “This is a day trader’s market,” said Christian Fromhertz, CEO of Tribeca Trade Group. “That’s not my favorite type of trading, but the day-to-day swings and the overnight moves are pretty insane.”

Among the industries trading in positive territory Thursday was energy, with the S&P sector up more than 6%. Big oil producers like Diamondback Energy and Apache rose more than 11% each as futures contracts tied to the price of West Texas Intermediate crude rallied 23%, its biggest one-day move ever.

“Markets are clearly in a state of panic and forced liquidations — but risks remain skewed to the upside and this should become much more apparent once some of the solvency issues are addressed,” Adam Crisafulli, founder of Vital Knowledge, said in a note.

Wall Street has been on an unprecedented roller-coaster ride amid the coronavirus turmoil, with the S&P 500 swinging 4% or more in either direction for eight consecutive sessions prior to Thursday.

“There’s a dollar strain on the system, globally,” Gregory Faranello, head of U.S. rates trading at AmeriVet Securities. “Whether it’s Asia, Brazil, emerging markets, Europe or here in the U.S., the dollar is in demand right now.”

“If you look at everything across the board, it’s all going down together. The one thing that’s going up that’s dollar denominated is the U.S. dollar,” he added.

The dollar index, which tracks the greenback’s performance against a basket of other currencies, jumped Thursday to its highest level since January 2017. It last traded up 1.5% at 102.67.

On Wednesday evening, the European Central Bank announced a new Pandemic Emergency Purchase Program that will deploy €750 billion ($819 billion) to purchase securities to help support the European economy. The central bank said purchases will be conducted until the end of 2020 and include a variety of assets including government debt.

The ECB’s action follows similar initiatives by the Federal Reserve. The Fed announced earlier this month plans to pump an additional $1 trillion into the U.S. economy through asset purchases and cut the federal funds rate to zero. The Fed also said Wednesday night it will create a backstop for prime money market funds.

“Central banks, particularly the Fed, really are playing whack-a-mole with the financial system,” said Eric Winograd, senior economist at AllianceBernstein. “Every day, a new area of distress pops up and every day, they’re coming up with a new program or rebooting an old program.”

“They’re finding a way to deal with it, but it’s putting an awful lot of stress on the ability of policymakers to keep up,” Winograd added. “It’s good that they are being as proactive and as aggressive as they are, but it’s tough sledding.”

On the fiscal side, President Donald Trump signed Wednesday a bill that that expands paid leave for workers during the coronavirus crisis. That bill was signed as the administration and lawmakers iron out a stimulus package potentially worth $1 trillion.

On Thursday, Trump said he would not oppose barring companies from conducting buybacks if they receive federal assistance during the pandemic.

Coronavirus cases around the world top 236,000, according to Johns Hopkins University. In the U.S. alone, more than 9,790 cases have been confirmed along with over 150 deaths.