China stocks climbed on optimism before President Xi Jinping’s address in the southern city of Shenzhen this week.

The Hang Seng China Enterprises Index rose 2.7% at the close, the most since July 6. Xiaomi Corp. surged 8.4% to lead gains, while Industrial & Commercial Bank of China Ltd. jumped the most in three years. The CSI 300 Index rose 3% as it trades near a five-year high.

Xi is expected to shore up plans to make southern China a global technology hub during the trip. He is scheduled to deliver an address on Wednesday, the official Xinhua News Agency said. China will take cooperation between Shenzhen and Hong Kong to a “higher level,” Xinhua reported earlier, without offering more details.

“Investors are optimistic on further reforms and upgrades for Shenzhen, which are expected to drive foreign capital inflows and enhance the tech sector,” said Patrick Shum, director of investment management at Tengard Holdings Ltd. 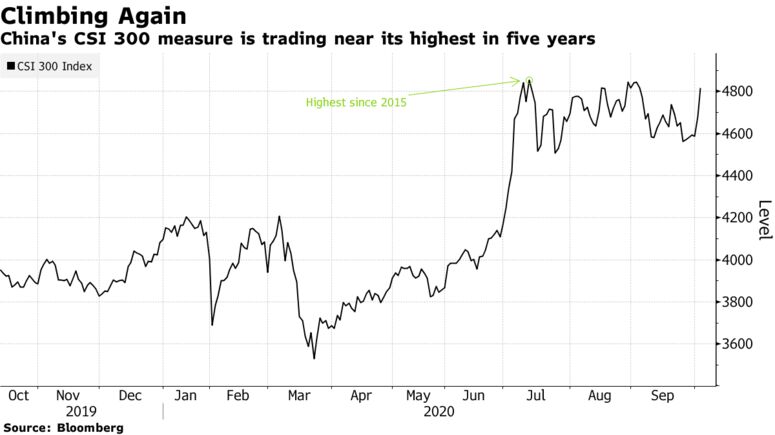 China has been seeking to better integrate Shenzhen, the surrounding province of Guangdong and the former colonies of Hong Kong and Macau into what it calls the Greater Bay Area. The effort faces new challenges amid trade and security disputes with the U.S., anxiety over the new security law in Hong Kong and travel restrictions prompted by the virus pandemic.

Chinese equities listed in Hong Kong have underperformed their mainland peers in 2020, with the Hang Seng China gauge still down 12%. The CSI 300 is up 18%, beating most of the world’s major benchmarks. That spread last week pushed the premium of stocks on the mainland over their Hong Kong-listed peers to the highest since 2009.

The measure of key equities listed in Shanghai and Shenzhen has now risen at least 2% in both sessions since a long holiday break to start the month. Optimism that a major meeting of the ruling Communist Party scheduled for later this month will yield policies to boost demand provided the earlier boost to equities.

Xiaomi’s gain extended its advance this year to 111%. China Unicom Hong Kong Ltd. and China Telecom Corp. rose at least 5.5%, among the best performances on the Hang Seng China gauge.

ICBC jumped 5.7% in Hong Kong after trading at the biggest discount to its Shanghai shares since early 2018. Its mainland shares added only 1%. The gains may point to a sustained uptrend in Hong Kong equities if mainland capital starts to flow in greater amounts into Chinese banks. Mainland investors bought HK$7.5 billion ($963 million) of the city’s shares on Monday, the most in three months. ICBC is the biggest drag on the Hang Seng China measure this year.

“The AH premium is at the highest level in years, and the banking sector had the biggest discount,” said Alvin Ngan, an analyst at Zhongtai Financial International Ltd. “The H shares of Chinese banks are just waiting for a catalyst to close the gap with their mainland peers.”

Shares of firms based in Shenzhen, which has grown from a fishing village to a metropolis of more than 13 million people over the past four decades, also advanced on Monday. Software maker Shenzhen Forms Syntron Information Co. soared by the 20% daily limit, and Shenzhen Airport Co. added 5.4%.